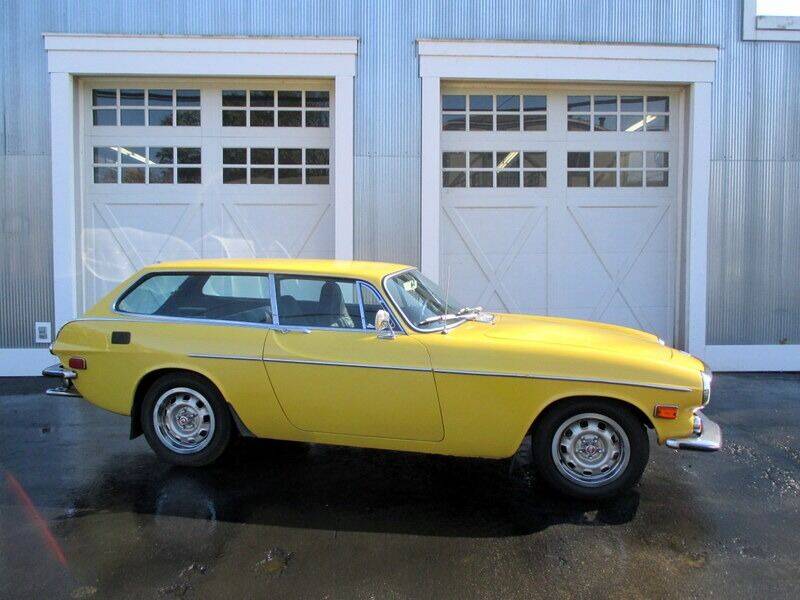 When you turn your car on does it return the favor? We are pleased to offer this Yellow 1972 Volvo 1800ES 2 door Shooting Brake from Florida for your consideration. A limited number of only 8000 of these sporty cars were produced in 1972-1973. It is fitted with a 2.0 liter Fuel Injected 4 cylinder mated to a 4 speed manual with overdrive transmission. The previous owner replaced all ball joints, brake calipers, master cylinder, the entire exhaust and installed Bilstein Shocks all around. We converted the FactoryAC to a Sanyo Rotary Compressor with R134 freon and have gone over this classic front to back. The P1800, on the market for 10 years as a 2 door coupe, gained massive popularity as a sporty and extremely reliable car that was visually pleasing. In 1972 Volvo introduced the ES version as a wagon so to gain traction in the utility and wagon market. The car carried the same most excellent look as the P1800 couple, same rock solid mechanicals and same sporty feel, but gave the car more passenger and cargo room. The P1800 is known for its longevity with Irv Gordon's 1966 1800 surpassing 3 million miles in September 2013. A pink version of this collectable classic1800 ES was given to Playmate of the Year, Marilyn Cole, in 1973. Famous people with the Volvo 1800 include Jerry Seinfeld, Jay Leno, Crown Prince Carl Gustoff, Roger Moore (The Saint), Raquel Welch, Jerry Garcia, The Who and many more. Building off the resounding success of their wonderfully-styled 1800 sports coupe, in 1972 Volvo introduced the 1800ES sports wagon. The ES was built using the same mechanical underpinnings as the contemporaneous 1800 line, although now featured a shapely shooting brake body with a frameless, all-glass rear hatch. Power came from a fuel injected, 2.0-liter inline-four cylinder engine paired to a four-speed manual transmission with overdrive. This new design was attractive and perfectly congruous with the preexisting sport coupe thanks to designer Pietro Frua's continued involvement (and additional tailoring by Volvo styling chief Jan Wilsgaard). Furthermore, the model's roomier storage capacity improved functionality, broadening the everyday appeal of the sporty 1800 line. Unfortunately, increasingly stringent safety regulations spelled early doom for the model, and just 8,077 examples were produced during the 1972 and 1973 model years. As such, the car's graceful design, reliable powerplant, and low production volume have made it arguably the most sough-after classic Volvo specimen. This charming 1800 ES is presented having been treated to an earlier restoration during previous ownership, and now wears its factory-correct colors over black leather with brown carpets.