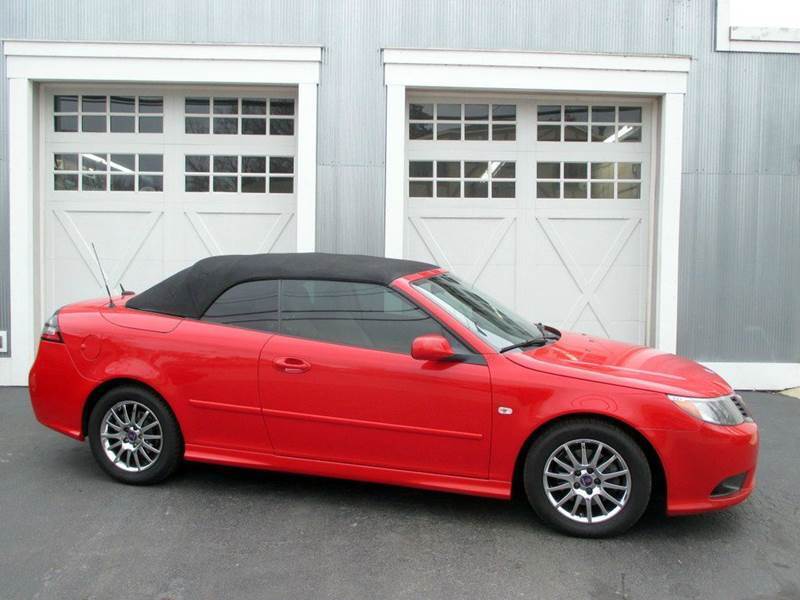 This low, low mileage rag top was sold and serviced here at Swedish Motors This Laser Red 9-3 Convertible with a Sentronic Automatic Transmission and Parchment Leather is something special to look at and a hoot to drive. If Tiger Woods's new driver were three times as stiff, he might whack the ball 450 yards. If Mark McGwire's bat had been three times as stiff, he might have hit 90 home runs in a season. If a Saab 9-3 convertible were nearly three times as stiff, it would be the 2008 9-3 convertible you see here, a whole lot nicer and better-behaved machine than any previous Saab convertible. They kept the dimensions, the front-end sheet metal, and much of what was underneath it, but starting at the windshield, "We built a whole new car from there on back," according to one Saab official. The convertibles will be built for Saab by Magna Steyr in Graz, Austria, not in the Swedish headquarters at Trollhattan. The resulting Saab 9-3 convertible is one of several European four-seater, all-weather ragtops varying in price from $40,000 to $50,000 in base trim. They have tops that are tighter-fitting, better padded, and quieter than any previous convertible tops and that disappear behind the second seat. Cowls trail off the rear head restraints for a more sporty look. It is built around the 210-hp, 2.0-liter Ecotec corporate engine that puts out 221 pound-feet of torque, although Saab uses only the Ecotec block and provides all its own internals, turbocharging, and mapping. Its power will be more than adequate for most of Saab's traditional turbo customers. It is equipped with electronic stability control, along with automatic rollover protection bars that deploy in 15 milliseconds. This convertible is 200 pounds heavier than the previous model, almost all of it in chassis and body reinforcements that make it almost 200-percent more resistant to twisting and bending, and it couldn't happen to a more deserving car. The old convertible had all the structural rigidity of shredded wheat and was prone to massive torque steer, especially the Viggen version. You could cross a railroad track and vibrate for the rest of the afternoon. That kind of ricketyness has been banished completely. When the new six-bow top is down, it's beautifully integrated inside and out, from end to end. This one also goes, for the most part, exactly where you point it, with just a memento of steering lightness when you first mash the pedal and the nose lifts up. Like no other Epsilon-based car, the Saab has passive rear-wheel steering built into the rear bushings, and it helps make the car feel sure-footed in everything from quick jinks to 100-mph sweepers. Top down, you can talk to your pals without shouting. The new seats hold you like your mom did when you were three and are just as comfortable. Every Swedish Motors vehicle goes through an Extensive Service Inspection and Detailing Service before being placed on our lot. We carefully hand select every vehicle and offer a 1 month/1,000 mile warranty.

Be protected. Check for open recalls:

Information deemed reliable, but not guaranteed. Interested parties should confirm all data before relying on it to make a purchase decision. All prices and specifications are subject to change without notice. Prices may not include additional fees such as government fees and taxes, title and registration fees, finance charges, dealer document preparation fees, processing fees, and emission testing and compliance charges.